Background: domestic strength in the 1990s

Arçelik has been making domestic appliances – washing machines, refrigerators, freezers and ovens – since the 1950s. It is controlled by one of Turkey’s leading and most respected industrial groups, Koç Holdings. The holding company had sales of $43 billion in 2010 and, within this, Arçelik had sales of $3.5 billion – by any standards, an important company. Back in the 1990s, Arçelik’s domestic appliance business had been steadily expanded to dominate its Turkish home market. The country itself had a population of over 70 million with rapidly rising wealth. Arçelik’s nearest competitor was another Turkish company called Vestel. But Arçelik’s strategies were so successful that it had almost four times the sales of its rival. There were four key strategies:

1 branding under the Arçelik and Beko brand names;

4 extensive and dominant distribution outlets in all the main Turkish towns.

Change in the strategic environment: Turkey’s economy takes a downturn

Around year 2000, Turkey’s economy took a severe downturn. Arçelik was already exporting its domestic appliances outside Turkey in small quantities, but this only amounted to 15 per cent of its business. Suddenly, the company was faced with a serious profit problem. Economies of scale are a key factor for success in the domestic appliance business, but the local Turkish market was in decline. The company decided to export more of its products. But which countries and with what strategies?

Western European markets for domestic appliances – like Germany, the UK and France – were large but relatively mature. The lack of growth made it more difficult for new companies to enter, especially those from outside the European Union (EU). However, the EU had agreed to reduce its trade barriers with Turkey back in 1996, so EU markets were at least open to Arçelik in 2000. The problem was rather different in Eastern Europe. Markets were just beginning to open up after the fall of communism. Wealth and demand for consumer products was rising, but there were few good manufacturers. As a result of these differences, Arçelik decided on a two-pronged strategy. In Western Europe, it would export domestic appliances from its Turkish factories and acquire some European brand names. In the east, it would also export but would also set up factories that would serve regional markets. The outcome was a significant increase in international sales – see Figure 3.9 . Much of this increase was founded on the four home strategies outlined above. However, there was one difference. Arçelik judged that it would take too long and be too expensive to copy the home market competitive advantage of its own shops and distribution outlets. It would simply sell Arçelik products through existing stores. 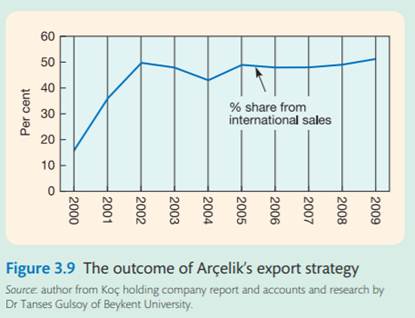 In order to gain a rapid foothold, Arçelik bought a series of small companies in France, Germany and the UK. These acquisitions were not wholly successful because the company needed to manufacture its products from its efficient plants in Turkey so it was really only buying brand names and reputations such as its purchases of the Flavel brand in the UK and the Grundig name in Germany. There were also reported to be other brand and company acquisitions, for example Arctic in Romania, Blomberg in Germany and Elektra Bregenz in Austria with most of these becoming sales and service companies for the Arçelik/Beko range. In addition to its acquisitions, Arçelik had to make another strategic decision: whether to make OEM goods or sell branded products. Original equipment manufacture (OEM) refers to products that are made by one manufacturer and then sold to a second company who will re-brand them with the name of the second company. For example, Arçelik had the opportunity to make washing machines which were then sold in the UK under the brand name of a well-known retailer such as Tesco. The problem with OEM is that such contracts depend largely on price. Customers can switch over time to rivals offering lower prices. Competitive advantage is there fore low. By contrast, branding is initially more expensive in terms with, for example, the costs of advertising and sponsorship. However, it has several advantages. It allows companies like Arçelik to develop innovative and patented products and to develop a widely respected brand name over time. Importantly, branding and quality products were closer to Arçelik’s core competencies back in its home country and thus familiar strategies for this company to develop and manage.
Initially, Arçelik undertook some OEM contracts. But its main strategy in Western Europe was brand building with the Beko brand name: the Turkish name Arçelik had some problems in terms of spelling the specialist Turkish letter ç and pronunciation in Western markets. Its acquisitions were supported but the main strategic effort was put behind the brand name Beko. Arguably, the acquisitions were expensive and unnecessary in the long term. Moreover, Arçelik had registered over 130 patents across Europe in a range of domestic appliance applications, thus delivering potential competitive advantages for its Beko branded product range. Over the years from 2001, Beko slowly built its branded sales in some Western European countries. By 2010, it had become the second largest brand in the UK using advertising and sponsorship, strong retail distribution, good design and relatively low prices. It was less successful in Europe’s biggest market, Germany, where the international and local brand competition was particularly strong. International brands included Electrolux and domestic brands included the German companies Bosch and Miele.

Arçelik in Eastern Europe and beyond
Given the low labour costs and potential for higher growth in Eastern Europe, Arçelik’s strategy in this area was different. There were no acquisitions because there were no attractive companies. However, there were some opportunities, to set up new factories and build brands. As a result, by 2010, Arçelik had set up new plant in Romania and Russia and its brands held 35 per cent of the Romanian market and nearly 10 per cent of the Polish market. Back in 2000, Arçelik opened up a sales office in China. Market demand was such that the company decided to expand its operations in 2007 by opening up its first factory in that country. It then followed this with a small number of Chinese domestic appliance stores – similar to those back in Turkey.

Although the company made major advances in Europe in the period to 2010, it also suffered a dip in profits over this time – see Figure 3.10 . In 2008, its profits were still based largely on its Turkish production plants and had declined by 25 per cent compared with two years earlier. This was primarily due to a drop in sales as European market demand declined as a result of international economic pressures: economies of scale can be affected disproportionately by declines in sales. Arçelik reacted by new cost cutting and efficiency strategies inside the company: better inventory management and improved stock turnover resulting in lower working capital. By 2011, Arçelik had become the third largest domestic appliance brand in Western Europe behind Electrolux from Sweden and Indesit from Italy.

1 What strategic environmental factors have influenced Arçelik’s strategic decisions? And with what outcomes?

2 What were Arçelik’s competitive advantages? Why was OEM inconsistent with these? Given its profit problems in 2008, would you have advised Arçelik to change strategy and pursue some OEM contracts?

3 Thinking about the various possible growth markets around the world, would you advise Arçelik to open up more country markets as part of its growth strategy? Or should the company concentrate primarily on its existing countries? You can assume that Arçelik is typical of many companies with only a limited amount of resources – both financial and human – to undertake further expansion.

Buy plagiarism free, original and professional custom paper online now at a cheaper price. Submit your order proudly with us

Why do all the logistics costs seem to be rising at the same time when the quantity... What was once deemed as the future in safe effective pain care management has...
Scroll to top
WhatsApp US Now